tar and feather
1. To punish (a person) by covering with tar and feathers.
2. To criticize severely and devastatingly; excoriate.
From the 4th to the 7th of August 2011, some of the best galleries in Australia and New Zealand will host some of the freshest and most exciting artists as part of Auckland Art Fair, New Zealand's premier contemporary art event.

Not everyone will be there...
Running in tandem with Auckland Art Fair, a selection of artists not represented at the fair will be showing their work in nearby pop-up galleries. One such gallery will be Tarred & Feathered.
To be tarred and feathered was an unofficially sanctioned form of public display. It was designed as a punishment and to force the subject to change their ways or run them out of town.
In August 2011 we hope that won't be the case...
'This show is not intended as a criticism of Auckland Art Fair. To the contrary, we see it as an opportunity to give art patrons an expanded view of an art scene. During this time the spotlight will be firmly cast upon the Viaduct Events Centre; this is just our attempt to take advantage of some of that light and heat'.
Sincerely,
The Organisers.

Posted by Chris Dennis Art at 8:32 PM No comments: Links to this post

Self-Portrait of Harry White I  has been selected as a finalist at the regional stage of the  Cliftons Art Prize. The piece can be seen from June 1st at the Cliftons venue in Auckland along with the other finalists: Kathryn Stevens, Rosanne Croucher, Julian Mckinnon, Isla Osborne and Melinda Butt. A reception/prize announcement will be held on June 16th from 6-8pm at Level 2, 45 Queen Street. 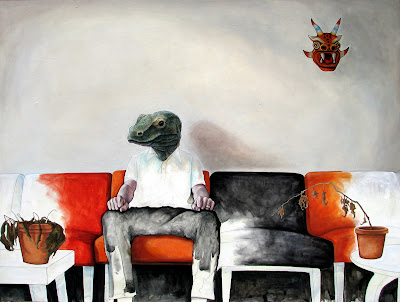