I have 2 pieces courtesy of Coup d'oeil Art Consortium included in this show:


Art exhibitions centered on the relationship between humans and other creatures, The Multispecies Salon 3: Swarm, will open in the St. Claude Arts District of New Orleans on November 13, 2010 from 6 pm to 10 pm and will run through December 5th.

Spawned by the annual conference of the 2010 American Anthropological Association (AAA), this year convening in New Orleans, the Multispecies Salon will explore relations between humans and other creatures. Art shows will be installed at three sites in the St. Claude district: The Ironworks, (612 Piety St.), The Front (4100 St. Claude Ave., on November 13th only), and Kawliga Studios (3331 St. Claude Ave.).

The swarm is a network with no center to dictate order. Swarming is the tactic, rather than the theme, of the Multispecies Salon. Three interrelated themes—orbiting around human relationships with plants, microbes, and animals—will come together in the Multispecies Salon: “Hope in Blasted Landscapes”, “Edible Companions”, and “Life in the Age of Biotechnology.” Hope in Blasted Landscapes will showcase forms of life that persist in post-industrial sites, in the aftermath of disaster. Blurring the boundaries between food and art, we will invite gallery visitors to eat Edible Companions—critters whose bios, biographical and political lives, might provoke a bit of indigestion. Life in the Age of Biotechnology will feature new organisms and machines that have been created by humans or are dependent upon on humans for their very survival.

An opening reception will take place at all three gallery sites on Saturday, November 13, from 6 pm to 10 pm, in conjunction with the Prospect 1.5 biennial and the St. Claude Art Walk. The Swarm Orbs, spherical robots that embody the tactics of our show, will be on the move outside The Front Gallery among goats from Pretty Doe Dairy, creatures involved in an urban bioremediation project. Samples from a buffet of edible insects, prepared by Zack Lemann of the Audubon Insectarium, will also be available to visitors.

Multispecies Salon events will continue the following week in association with the American Anthropological Association (AAA) conference as well as the New Orleans Fringe Festival, both from November 17-21. Internationally renowned anthropologists will give lectures about human relations with other species, free and open to the public, at Kawliga Studios (6:30-7:30 pm, on Monday, Wednesday, and Friday, November 15-19).

Anthropologists will become embedded art critics at the Multispecies Salon—working alongside the curators to help stage and document the events with a live blog. Happenings in art worlds will accompany discussions at the AAA conference about the emergence of a new approach to anthropology: multispecies ethnography. Literally ethno-graphy means “people writing” and conventionally anthropologists have limited their research to human realms. “Creatures previously appearing on the margins of anthropology — as part of the landscape, as food for humans, as symbols — have been pressed into the foreground in recent ethnographies,” write Eben Kirksey and Stefan Helmreich in the November special issue of Cultural Anthropology, the flagship journal of the discipline. 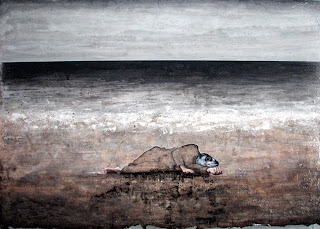 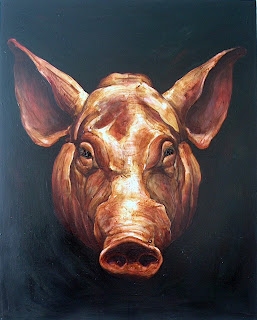 Swine is included in Edible Companions, curated by Nina Nichols and Amy Jenkins.

Multispecies Salon 3: SWARM
Posted by Chris Dennis Art at 11:48 AM