It's little more than a week before we install the show so here's all the information:
Big thanks to Premier Print and Pernod Ricard New Zealand for helping us out. 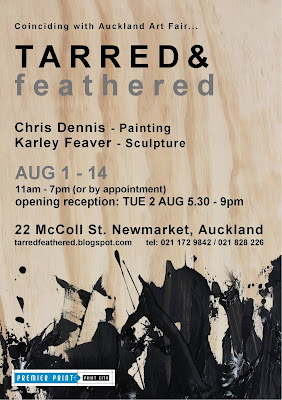 Press Release:
T A R R E D & f e a t h e r e d
August 1st – 14th, 2011.
Mon – Sun:  11am-7pm (or by appointment).
Opening reception: Tuesday August 2nd, 5.30 to 9pm.
From the 4th to the 7th of August 2011, the Auckland Art Fair will host the best galleries in Australia and New Zealand showing some of the freshest and most exciting art and artists.
Not everyone will be there...
Coinciding with Auckland Art Fair, Tarred and Feathered will run from August 1st to 14th at, 22 McColl Street in Newmarket (adjacent to Auckland’s prestigious Tim Melville and Fox/Jensen galleries).
With an opening reception on Tuesday August 2nd from 5.30 – 9pm, this 2 person show will feature sculpture by Karley Feaver and painting by Chris Dennis.
tar and feather
1. To punish (a person) by covering with tar and feathers.
2. To criticize severely and devastatingly; excoriate.
To be tarred and feathered was an unofficially sanctioned form of public display. It was designed as a punishment and to force the subject to change their ways or run them out of town.
In August 2011 we hope that won't be the case and look forward to seeing you.
Karley Feaver grew up in New Plymouth and is now living in Auckland.  She works across a range of disciplines including painting, sculpture and taxidermy. In 1997, Karley spent 2 years at Wellington School of Design studying Industrial Design, before moving to Auckland to study 3D design at Unitec.  Karley has exhibited throughout New Zealand and her works are held in private collections in the UK, Australia, Russia and New Zealand.
My works offer a vision of a world where fantasy and reality merge into infinite possibilities, uncertainty, and wonder.  Themes such as life, death, beauty, restriction and escapism are explored, sometimes from moments or happenings I experience in my life.  My use of taxidermy can evoke powerful emotions and inspire our morbid curiosity surrounding death.  Representations of humans are introduced in the form of dolls and the choice of animal is deliberate and used as a symbolic reference to the themes I explore in my work.
Chris Dennis grew up in, England. He studied natural history illustration at Bournemouth and Poole College of Art and this classical training is evident in his current therianthropic work.  After completing his BA (Hons) at the University of Wolverhampton he relocated to the United States, and in 2000 earned his MFA from the University of Art in San Francisco. In 2010 after a period in Berlin, Chris made Auckland his permanent home. He has exhibited in the UK, Germany and across the United States.
My paintings are perhaps best described as ‘Narrative expressionism’ or ‘internalized portraiture’. The stories behind these ‘Therianthropic’ pieces have been carefully obfuscated and invite the viewer to create their own narrative, bringing to mind facets or emotions that maybe more difficult to confront if not disguised behind a mask.
22 McColl Street.  Newmarket.  Auckland.   Map
Tel: 021 172 9842 / 021 828 226
Enquiries: tarredandfeatherdnz@gmail.com
Information: http://tarredfeathered.blogspot.com    Facebook
Posted by Chris Dennis Art at 1:32 PM