A Blind Man in His Garden - POOL Projects, Zürich.

(Press Text): A Blind Man in His Garden is the fourth in a series of pilot exhibitions organised by POOL, featuring works from the collections of Maja Hoffmann and Michael Ringier.
The exhibition will be curated by de Appel alumni Kris Dittel (b. 1983, Slovakia) and Emma Panza (b. 1985, Italy) and mentored by Lorenzo Benedetti, Director at de Appel arts center, Amsterdam.

How to deal with the impossibility of experiencing an artwork or constellation of artworks to its fullest? If our understanding of it is always fragmented, based on factual information, a compressed image in a database or newspaper, lessons learnt and forgotten, can we allow our sensations and intuitions to take over our imagination? 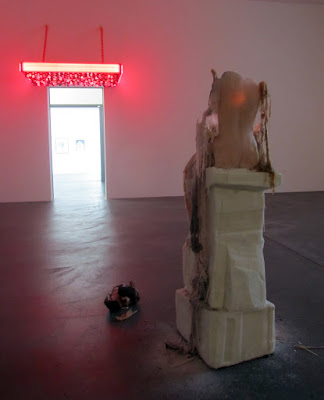 (cont). A Blind Man in His Garden is an exhibition that emphasizes subjective narratives, and puts forward a reading of an artwork, or exhibition, based on personal associations, previous knowledge and encounters. The title of the exhibition also refers to Joel Sternfeld’s photograph, A Blind Man in His Garden, Homer, Alaska, which suggests that there is a potential of artworks to trigger single or multiple narratives. By shifting the attention away from the visual experience of a lush rural landscape towards the imagination of vivid sensations, probably felt by the depicted man, the artwork encompasses numerous possibilities to experience it beyond its visual qualities.
A Blind Man in His Garden is a fable with an open ending, a hidden path inside a network of mystical déjà vus, where the garden eventually becomes a place where any act of imagination can find a space beyond its visual connotation.
Featuring works by
Eija-Liisa Ahtila, Pawel Althamer, Danai Anesiadou, Richard Artschwager, Melchiorre Bega, Walead Beshty, Monica Bonvicini, Mark Bradford, Maurizio Cattelan, Valentin Carron, Spartacus Chetwynd, Silvie Defraoui, Trisha Donnelly, Urs Fischer, Peter Fischli/David Weiss, Sylvie Fleury, Katharina Grosse, Thomas Hirschhorn, Jenny Holzer, Mike Kelley, Ragnar Kjartansson, Jorge Pardo, Philippe Parreno, Seth Price, De Rijke/De Rooij, Wilhelm Sasnal, Jim Shaw, Slavs and Tatars, Christopher Williams.

With contributions by Dina Danish and Styrmir Örn Gumundsson

POOL
Posted by Chris Dennis at 8:35 AM