I received an interesting comment on a post I made back in 2010 (Drawings 'attributed' to Francis Bacon) when I was in Berlin (not sure about his statement equating illustration with a 'literal likeness', though). The large pastels currently being offered in London look pretty bad, but were not part of the show I saw. Bacon really attacked the surface of the canvas with his brushes and I don't think it's a leap to see a similarity in some of the sweeping graphite gestures in the drawings. 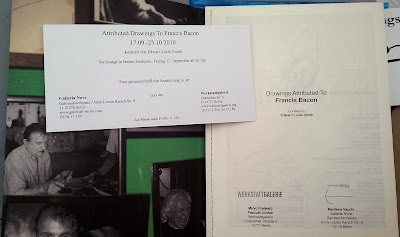 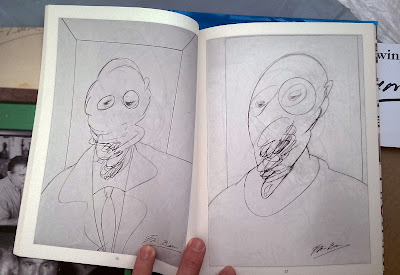 
"Martin Harrison is absolutely correct in stating that the 600 drawings owned by Cristiano Lovatelli Ravarino are not by Francis Bacon. I visited Bacon at his Reece Mews studio in 1981 and I asked him if he ever considered using charcoal for portraiture since this
coarse and grainy rugged-textured medium can produce the very 'non-illustrational' free-marks that Bacon often achieved from oil paint.

Bacon always wanted to get away from what he called 'illustration' (a literal likeness) and with charcoal one can make 'non-illustrational' marks that form facial features without having to literally 'draw' them in. Charcoal would have been the ideal medium Bacon would have used had he wanted to make 'complete' (not sketched) artworks (portraits), and not pencil.

I asked Bacon if he ever used pencil to make portraits with and he said no, and he told me that he did not like the pencil drawings of Lucian Freud saying that they were far too 'refined' and 'detailed'.

Drawing in pencil is antithetical to the ethos of anti-illustration that Bacon aimed at. The Cristiano Lovatelli Ravarino drawings have eyes that are far too literal, far too 'illustrational', to be by Bacon.

The crude and garish bright colour schemes used in these 'Italian drawings' are reminiscent of pop art that are not used by Bacon. Why would Bacon - who was into 'chance' making 'arbitrary' and 'irrational' marks, use such a 'graphic fine art' medium such as pencil? Bacon used to throw paint at the canvas; but one cannot throw pencil at a piece of paper! The Francis Bacon Estate is right to reject these drawings as not made by the hand of Bacon".
Art Newspaper Story -  Unauthenticated Francis Bacon works go on sale in London

The Herrick Gallery
Posted by Chris Dennis at 11:27 PM