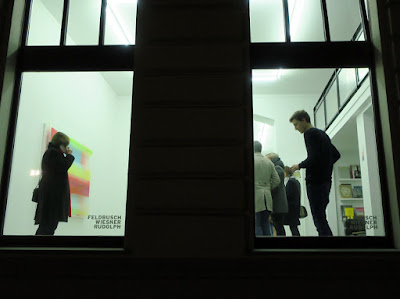 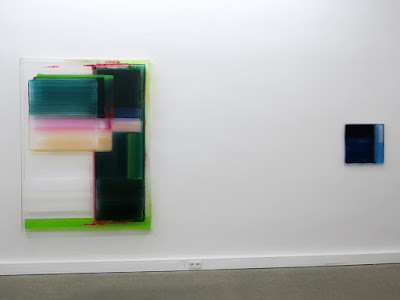 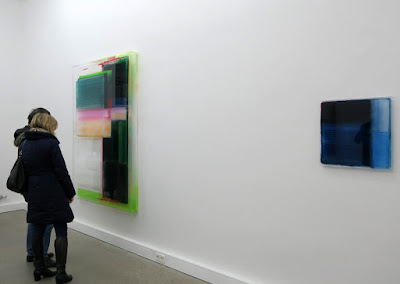 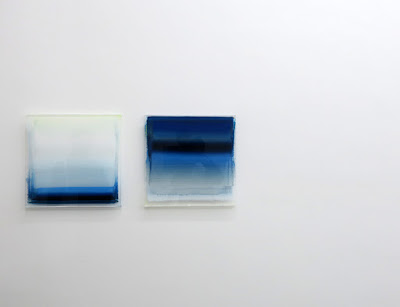 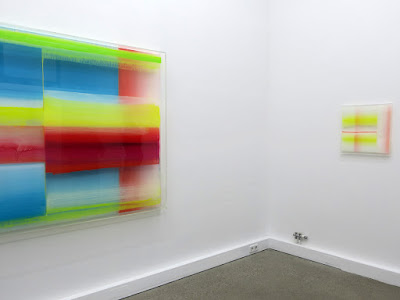 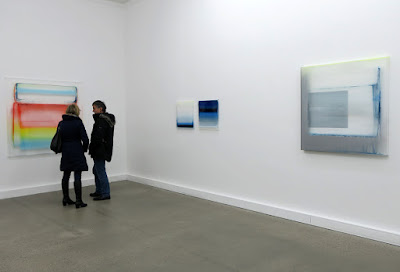 Press release: A professor of painting at the University of Fine Arts (HBK) in Essen, the artist already looks back on a 20-year career in which she established herself primarily as an abstract painter.
Architectonic layers of horizontal and vertical strips of color alternate with clearly defined forms in motion, such as semicircular arches and spirals that come alive as the paint flows. With Staeglich’s work series, “Transparencies,” and her use of a new type of substrate, acrylic sheets, the light comes into focus as a physical phenomenon and as a medium that determines the essence of painting. At the same time, the transparent sheet also liberates as well as presents Staeglich’s painterly actions in terms of an autonomous and ritualistic type of mimesis.
"Painting on a transparent substrate such as an acrylic sheet provides me with the highest degree of luminosity and the strongest contrasts that color can offer. It’s as if my keyboard had previously unsuspected octaves at its disposal. (…) In my "Transparencies", color is located behind the transparent and reflective surface of the sheet – in the distance between it and the wall. (…) The projection of color as well as the deposit of more increments of paint make for a complex type of color perception inflected by time and space. (…) I am driven by the desire to make colors float because then they become immaterial and space becomes infinite."
Nicola Staeglich (born 1970 in Oldenburg) studied fine arts at Johannes Gutenberg University Mainz (Meisterschülerin at Prof. Friedemann Hahn, 1997) and at the Städelschule Frankfurt (at Prof. Raimer Jochims, 1993-95). She also received her MA at the Fine Art Chelsea College of Art & Design in London (1997-98).
Staeglich holds several grants and scholarships such as the British Academy Award (1997/98), an artist in residence at Villa Serpentara by Akademie der Künste Berlin (2004) and in Pasadena, Los Angeles by the Senat Berlin (2005/2006) as well as an art scholarship from the Stiftung Kunstfonds Bonn (2005) etc.. After several lectureships, Nicola Staeglich is a professor for painting and drawing at the HBK Essen (since 2015)
The artist‘s work had been shown in several solo shows including at Lisa Norris Gallery London (2015), Kunstverein Schwäbisch Hall and Stadtmuseum Oldenburg (both 2014), Kunstverein Duisburg (2012), Goethe Institute Washington (2006), Galerie Wittenbrink München (since 2005) and others. Nicola Staeglich also participated in several group shows such as at Kunstverein Gelsenkirchen (2017), Bendigo Art Gallery Melbourne (2016), Georg Kolbe Museum Berlin (2013), Museum Kunstpalast Düsseldorf and Landesmuseum Oldenburg or Phayao Thailand (all 2013) as well as at Forum Konkrete Kunst Erfurt (2012), at ZKM Karlsruhe (2008) and others. 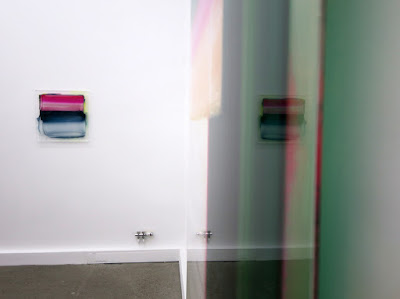