Anselm Kiefer's  'Il Mistero delle Cattedrali' at White Cube Bermondsey is the largest presentation of Kiefer's work ever made in London and spans 11,000 sq ft of gallery space.

If time had permitted I would have gone back to see it the next day, the day after that and so on.
I'm eagerly awaiting  the catalog , even though looking at photos of his work feels a little pointless. 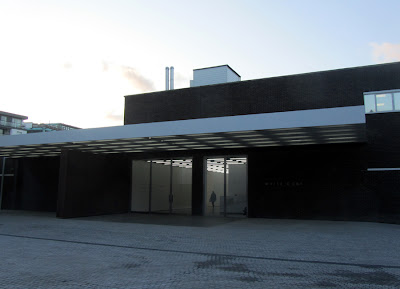 From the Press Release:
The title of the exhibition is taken from the esoteric publication by Fulcanelli (published in 1926), which claimed that the Gothic cathedrals of Europe had openly displayed the hidden code of alchemy for over 700 years. As with all Kiefer's work, allusions are never literal but reflect an ongoing interest in systems - mystical and material - which have evolved over centuries. Both title and exhibition reflect Kiefer's longtime fascination with the transformative nature of alchemy: 'The ideology of alchemy is the hastening of time, as in the lead-silver-gold cycle which needed only time in order to transform lead into gold. In the past the alchemist sped up this process with magical means. That was called magic. As an artist I don't do anything differently. I only accelerate the transformation that is already present in things. That is magic, as I understand it.'
All of the large-scale canvases on show use landscape as its starting point. Thereafter, Kiefer works on each of them rigorously and with intense physicality and some of the canvases are exposed to the elements. In addition, for this exhibition, many of the large-scale works have undergone an accelerated process of oxidisation. Consequently, images that may be seen to evoke the sublime are themselves subjected to the subtle but immense power of natural forces. 'You have to find a golden path between controlling and not controlling, between order and chaos' Kiefer has observed. 'If there is too much order, it is dead; if there is too much chaos, it doesn't cohere. I'm continually negotiating a path between these two extremes.'
As well as the over-arching theme of alchemy, Kiefer continues to wrestle with various history, notably twentieth century Germany. Among the most striking and monumental of all his recent motifs is that of Tempelhof Airport in Berlin. Finally closed in 2008, it is among the most charged and culturally loaded of buildings. Built in 1927 on land once belonging to the medieval Knights Templar, the airport was redesigned in the following decade as part of Albert Speer's master plan for the Nazi reconstruction of Berlin. The vast complex was intended as Hitler's gateway to Europe and as a symbol of his 'world capital', Germania. It was never finished but witnessed military activity during the Cold War and was seen by many as a forerunner of the airports of the late twentieth century, in its grandeur and ambition. In Kiefer's vast canvases, Tempelhof is transformed into a latter day cathedral, or a mystical site of aspiration, of absurdity, even apocalypse. 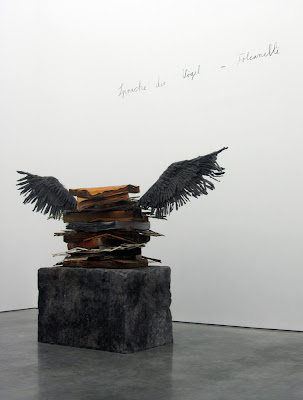 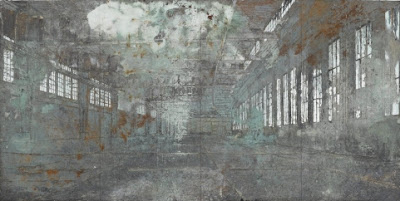 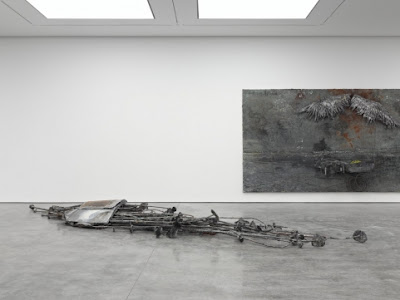 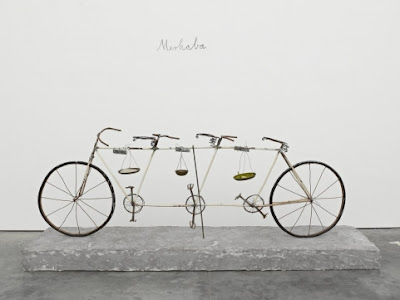 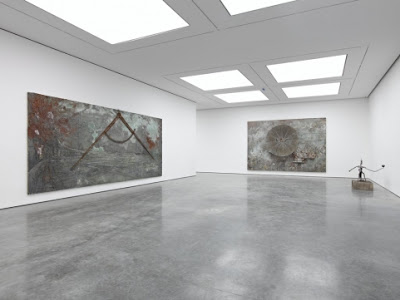 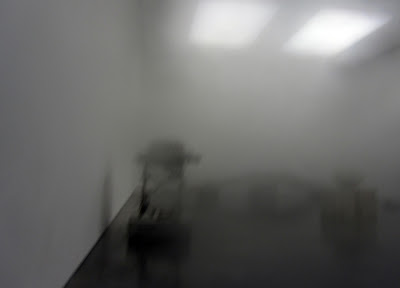 When a sweaty palm, holding a poorly concealed camera fogs up the lens, the show looks like this.
Posted by Chris Dennis Art at 8:55 AM