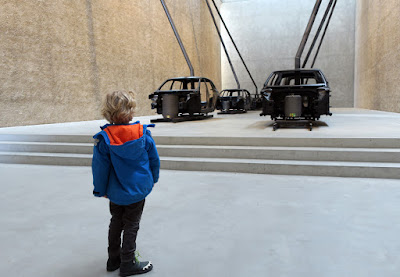 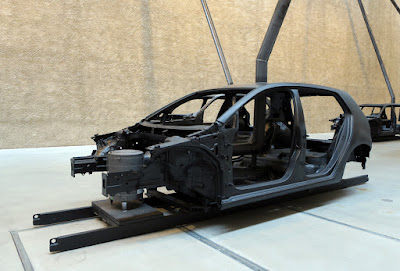 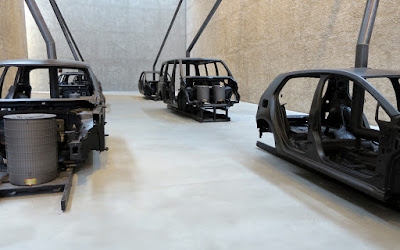 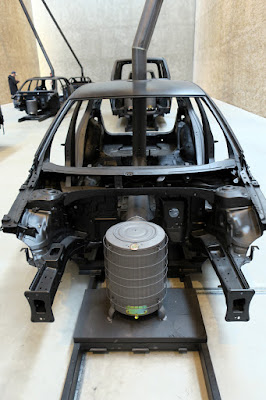 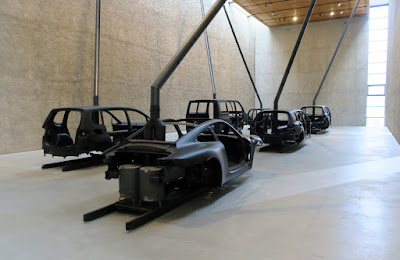 Press release: In his sixth solo exhibition at KÖNIG GALERIE, Berlin-based artist Michael Sailstorfer presents two uniquely paired works — Brenner (2017), a new, large-scale sculptural installation, and the video Traenen (2015). Both works consider not only their relationship to one another, but above all their respective placement within the gallery, making full use of the distinctive spatial possibilities afforded by St. Agnes. In a characteristic manner, Sailstorfer’s works in Hitzefrei demonstrate his unique understanding of the vocabulary of sculpture, formalizing and transforming known materials or mechanical systems into objects that readily and thoughtfully transcend their original purpose. At once solemn and darkly humorous, these works are imbued with a captivating tension, hinting at notions of destruction, transformation, and change.

Undoubtedly, these concepts have been recurring themes in Sailstorfer’s practice over time. We see this in a number of previous works — a car wheel endlessly grinding against a gallery wall; a machine incessantly producing and dispensing popcorn; the windows of a room shattered by high-frequency sound. In several cases, we are also given sensorial clues before we are able to directly confront these works visually — smells and sounds have the distinct possibility of hitting our nose or our ears first, shaping and affecting our experience from the very moment we first enter the gallery. In the work Brenner, the same holds true.
You can detect the faint smell of burning wood and feel an increased sense of radiated heat. As you enter the gallery, you are at first confronted with what appear to be a number of cars with cylindrical components extending upwards towards the soaring ceiling of the former church. More specifically, what is present is the outer, painted body panels and internal framework structures of production automobiles, as if they were pulled directly from the factory floor before completion. Embedded within each body configuration is a wood burning stove, located where the engine would normally be placed, with a chimney emanating from each at various angles to one another. Each car follows in line to the next in two rows, as if the assembly line has been re-envisioned for this particular space. Arguably, inherent in the form of an automobile is a sense of motion or action (and often freedom), yet these cars are resolutely stationary—burning their fuel, creating a different type energy, and expelling their spent gasses upwards through their chimneys. In an instant, a moving, functioning assembly line becomes a traffic jam—seemingly all roads are blocked, there is no way out, and it is distinctly possible that we could overheat. Becoming enveloped in this installation invites us to consider more deeply the space in which it is presented. What was once used as a place of religious worship could perhaps be now understood as a type of worship of another kind—that of brand devotion or veneration, and a culture of consumption. In this way, Sailstorfer provides many inroads into the analysis and interpretation of this ambitious installation.
Located in the (noticeably colder) bell tower of the church, Traenen is a recent video work that also romantically and humorously tackles the concept of destruction. While Brenner emits its smoke upwards and into the sky, the “raindrops” in Traenen deliver a multitude of destructive blows onto an unassuming house below. As the video begins, what appear to be exaggerated, cartoon-ish raindrops quickly make themselves known as very real, and very heavy, custom-fabricated wrecking balls. Three “drops” fall in succession, gradually obliterating the roof and chimney. The outer and inner walls come next, following an orderly system until the house stands in a ruinous heap. At this point we have a sense of satisfying conclusion, albeit one that comes from seeing a somewhat callous job completed. Visually, the removal of the wires attached to the wrecking balls in post-production editing imparts a sense of wonder or spectacle to the entire video. It’s a simple, technical act, but one that offers many rewards for the viewer, as it has the ability to keep this video in the realm of the fairytale rather than that of practical or pragmatic, linear sequence.
In both of these works, one quickly makes the intellectual leap from the consideration of physical and aesthetic positions at hand to that of the more humanistically metaphoric, allowing for narratives to be built, comparisons made, and the symbolic understood. 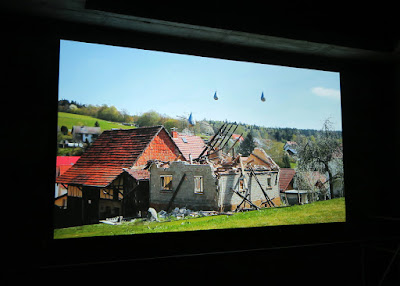 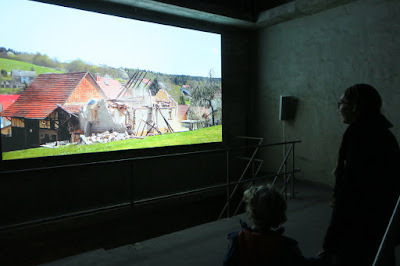 THREE POSITIONS. SIX DIRECTIONS. CHAPTER II: DOOR TO THE FUTURE, WINDOW TO THE PAST. 17.2.–26.3.2017
Press release: As the title suggests, the very location of the exhibition is at the core of
its theme. ST AGNES both contains it and inspires it. A show in three parts
presents both impressions from and reactions to the architecture, the history,
and its current repurposing, as expressed through a changing group of works by
artists ranging from historical to contemporary and emerging. A single work
remains throughout the run of the three “chapters” over three months, Franz
Erhard Walther’s Drei Standstellen. Sechs Richtungen, 1977, serving as the
constant pulse of the exhibition as the space of the gallery is reconfigured
for each changing show.

Chapter II: door to the future, window to the past.

Time has a power to change our perspective on things, and the Brutalist
mentality was not immune to this. A movement that began in the 1950s with a
full embrace and execution of modernist ideals came pretty much to a halt by
the mid-1970s. The physical decay of the buildings in the decades that followed
was somewhat representative of the popular view of the buildings, a style of a
specific era equally maligned as it was admired. But as time has gone further
to the present, we are able to revisit the structures as more than a fashion of
a period but as a mentality that has as many valid applications today as they
did back then.

The works presented in this “chapter” utilize a similar anthropological
approach. Although dealing with questions and issues that are firmly rooted in
the present, these artists mine the past to gain deeper perspective and
understanding. The reference to history may be personal (i.e. Aleksandar
Duravcevic, Roman Ondak, Matthias Weischer), cultural (i.e. Enoc Perez,
Stephanie Syjuco) or philosophical and ideological (i.e. Anselm Kiefer), but
all bringing forth their investigations towards contemporary concerns.

This show was created in collaboration with r/e projects.
Posted by Chris Dennis at 10:08 AM